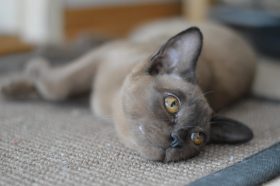 The Burmese cat has its origin in Southeast Asia where Burmese-like cats are described in the old Thai book Tamra Maew. In 1930, an American doctor acquired a Tonkinese with the name of Wong Mau. She is the “founding cat” for the Burmese breed. Later on in the development of the breed, Siamese cats were also used.

In the beginning of the 1950s the Burmese cat was approved in Great Britain, and a few years later the first Burmese’s were imported to Sweden.

The Burmese cat is an elegant, but surprisingly heavy breed. The coat is fantastic, short and smooth. It is silky and shiny due to its lack of soft underfur, and very little grooming is required. The classical description of these properties is “bricks wrapped in silk”.

The eyes are yellow with a straight upper line and rounded bottom line, which results in an impression that the cat is watching its owner from beneath a cap visor – the so-called “Burmese look”. Actually, it is positive if the cat looks a bit moody. The Burmese is currently approved in ten different colours: brown, chocolate, blue, lilac, red, cream, brown tortie, chocolate tortie, blue tortie and lilac tortie. 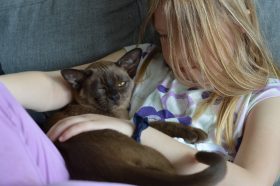 The Burmese cat is friendly and social, and happily welcomes new visitors. Compared to other oriental breeds, it is though rather quiet. It is playful and intelligent and really enjoys being involved in all sorts of activities at home. The Burmese cat is a master of opening closed doors. It is an ideal breed for a big family and gets along very well with children as well as other pets.

Taking care of your Burmese 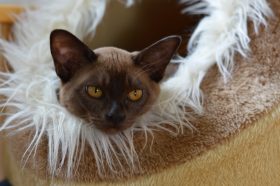 If you don´t already have a cat the best you can do is to buy two Burmese cats, for example siblings. The Burmese cat is very social and sleep together to collect heat from one another. Amongst Burmese cats this behavior is called “Burmese stack”. Due to this I will give a discount on kitten number two if you buy two cats from my breeding.

The best thing is to neuter your Burmese and let it live as an indoor cat. To give the cat fresh air you can, for example, secure the balcony with a safety net to prevent them from escaping, or build them a cat garden.

The coat only need minimum care with brushing every once in a while. The claws need to be trimmed every ten days. A good investment is to buy them a climbing tree since cats like to scratch on thing and also to climb and rest high above daily life. A climbing tree will give you both a content cat as well as it may save your sofa from scratch marks. It is also recommended to vaccinate your cat against Cat Distemper and Cat Flu.

Things to do with your Burmese 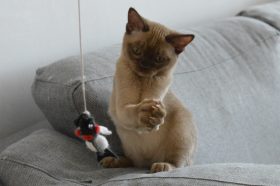 A surprisingly fun activity to try is to attend a cat show. If you live in Sweden I will pay the fee on your cat´s first show.

A Burmese can be tought to walk on a leash. It likes to follow its owner for a holiday. It is playful and can be tought simplier tricks as for exampel “high five”. Cat Agility is another speedy activity that you can try. On Youtube there are several clips that describe the sport.